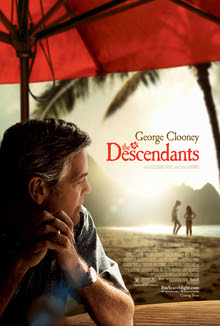 The best script of the year, hands down, belongs to The Descendents. You won't see a movie with more snappy dialogue and smooth lines this year. But the two story lines also weave together nicely.

The first story is of Matt King, played by George Clooney, and his family's attempt to sell their land, which they are required to do for legal reasons. Here's one big reason why this movie and script works. That should be a dull story, and they make it work. It's mostly the backdrop for the second and more import story, but it never gets lost, it never gets forgotten, and it enhances the main story.

The second and main story involves King's wife. She is in a coma, and King finds out that she was having an affair. He, with his daughters, tries to find the guy while they are dealing with the condition of his wife. It's an extremely emotional story that never gets melodramatic. It walks that thin tightrope of trying to be dramatic and funny - and pulls it off effortlessly.

George Clooney always picks great movies. Even him movies that I haven't enjoyed as much, such as Syriana, I appreciate and respect. He's at his best here. And surprisingly, so are the Amara Miller and Shailene Woodley, the girls who play his daughters. I noticed something during the final scene. It's a really simple shot of the family watching TV, with the camera in the place where the TV should be. They didn't feel like they were acting in that shot. None of them. And I recognized that in most movies with little kids (Miller is 10) you tend to notice that their acting is crappy, but they're kids so you often ignore it. Everything felt natural. Woodley plays his 17-year old daughter, thoough she is actually 20. I've read buzz of an Oscar nom for her. She deserves it, and I hope to see Clooney's name as well.

The minor characters are also very nicely written. Early in the movie, you'll meet a character named Sid, who is a friend of King's older daughter. You'll think that you have him figured out in his early scenes. But there's another layer or two revealed, and it works. It makes sense. You'll think he's just there for comic relief, but he also helps to tell the story.

Finally, I have to give a nod to the music. The movie takes place in Hawaii, so you can imagine what you hear, though it's never cheesy or feels like luau.

Created by His Excellency Kaboom32 at 9:17 PM