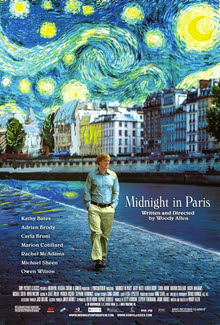 This became my favorite Woody Allen movie barely halfway through it. I submit that I haven't seen every one of his, but I've seen my fair share. I've actually enjoyed a few movies that he's done in the past few years, including Vicky Cristina Barcelona and Match Point (which hit number 8 on my 2006 list). Of his older stuff, I appreciate some of them, found no enjoyment at all in some of them.

I think that I like the Woody Allen character, but I want the character to do something other to be the whole movie. And that's one of the first ways that Midnight in Paris succeeds. Owen Wilson plays the Allen character, but there is actually a plot that he follows. Yes, I realize that I have said many times that the character arc is the most important thing in a movie. But it's even better when they do something.

And then we have Owen Wilson's performance. I mentioned that he plays the Allen character. But while you recognize it, it feels more like Owen is playing a homage to Allen instead of trying to be him. He moves in his own direction and gives it a light touch that I really liked. This was a guy that you really would like to hang out with for awhile. As he goes on his midnight adventures, you really understand why all of these people would really like him.

I'm being vague with plot details by using the word "adventures" instead of telling anything. I went into this movie knowing little more than the trailer and that it was getting good reviews, so nothing was spoiled for me. What happens after midnight is the big surprise of the movie, and I don't want to be the one to ruin it for you if you haven't seen it yet. However, in some things I have since read about, it has been spoiled. The closer it gets to Oscar season, it will be spoiled even more.

Luckily, it's out on DVD. Even luckier, it's still showing in some theaters around the Bay Area. Yes, a movie that came out at the beginning of last summer is still there in January. If you haven't seen it yet, check it out. If you are an English teacher and you still haven't seen it, or if you just plain enjoy reading some good literature, you definitely need to see it.

Also, I love that poster. My favorite of the year.
Created by His Excellency Kaboom32 at 7:52 PM

I saw this last week after many recommendations from ex-students who read a very famous book in my class. I liked it a lot, but you're right: I would've liked it more if I'd been delightfully surprised. I still didn't know who several of those people were, but I really liked the nostalgia theme of the film.

Wife is not an English teacher, did not like it nearly as much. She also doesn't like Woody Allen movies as a rule, whereas I'm more tolerant.