Number 4 - The Girl With the Dragon Tattoo 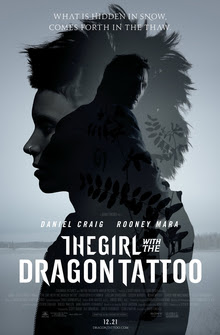 I really liked the Swedish version of The Girl With the Dragon Tattoo. I *sort of* put it on my top 10 last year, though I chose to group it together with all three movies, as they were released in the US in the same year. When I heard about the US remake so soon, I was quite doubtful. Mostly, I thought that there was no way that they could replace Noomi Rapace as the title character Lisbeth Salander. Noomi made the character cool. However, I rewatched parts of the original after watching this version. Seeing in through new eyes, I noticed that her characterization is more flat. She plays Lisbeth as a tortured, moody soul. But that's about it. I also saw Noomi Rapace in a new light when I saw Sherlock Holmes: A Game of Shadows. She was pretty bad in that, so I'm afraid she might just be a one trick pony.

As it turns out, the best reason to like the new David Fincher version is Rooney Mara in the same role. She not only exceeds the coolness, but she does something that makes a huge difference. She makes the character interesting. The new Lisbeth has a range of emotions, yet all are quite subtle. You have to pay attention to notice them. Luckily, she's good enough that you can't help but watch her when she's on screen.

After watching this version, I was finally compelled to read the book. The beginning of the book goes into a lot more detail with the business part of the movie - the more dull parts. I think both movies were quite successful in speeding that up. The new movie, however, changes the ending of the mystery. I'm not sure if it's better or as good, though.

Overall, however, the new version ends up being better than the Swedish. It has a better flow. It tells the story cleaner. It brings the characters into a new life. I understand that since box office numbers haven't been as good as they had been hoping, Sony isn't sure if they are going to go ahead with the next two movies. That would be a shame. As I said in my review last year of all three, they work best as a complete story. I need the next two to come out to inspire me to read the other two.
Created by His Excellency Kaboom32 at 9:43 PM