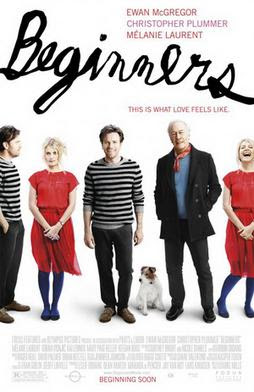 There are two really good stories here. The first is the relationship between Oliver (Ewan McGregor) and his father Hal (Christopher Plummer). After his his wife (and Oliver's mother) died, Hal came out of the closet. We watch the two of them interact as Hal is dying, with Oliver getting used to his father's new lifestyle.

The second story is between Oliver and his new girlfriend Anna (Mélanie Laurent). While the two stories are told mingled together, he meets her after his father has died. Anna is dealing with issues about her own father.

Ewan McGregor is great, and Christopher Plummer deserved an Oscar nom. The story is well told as it bobs and weaves through time, but not in a way that's too confusing. Oliver is an artist, and his drawings are used effectively to help tell the story and show the emotional condition.

Perhaps the best thing about the movie is that it avoids clichés in the relationships. Oliver and Anna's relationship is strained and difficult. But instead of cheesy romantic comedy misunderstandings, it's because of real issue's they are going through.With Oliver and his father,  it isn't the kid coming out of the closet but the father. Oliver's negative reactions aren't rooted in misguided religious beliefs, hatred, or homophobia, but confusion. And that's the only truly natural reaction as opposed to learned.
Created by His Excellency Kaboom32 at 8:16 PM