Number 6 - Rise of the Planet of the Apes 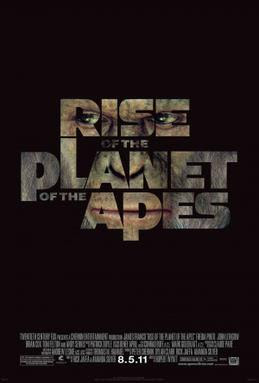 This was without a doubt the surprise of the year for me. I'm not a huge Planet of the Apes fan. I watched the original probably around the time that the Tim Burton remake was announced. I remember plenty of cheesy acting from Charlton Heston and a few other things, but it felt really dated. So I was in support of the remake. What I remember most from the remake, other than a severe feeling of being underwhelmed, was Paul Giamatti as one of the apes. And the ending too, I guess.

Had it not been for Rotten Tomatoes, I never would have considered going to see Rise of the Planet of the Apes. The trailer looked a little cool, but I expected all the best to be in there. So after seeing the tomato meter so high (currently at 83%), I decided to check it out.

The character arc of the ape, Caesar, is actually pretty good. I think the special effects have finally hit the point where my mind is mostly convinced that it's real. I'm not constantly noticing - "Oh, there's CGI." The pace of the movie works really nicely. The action is fun and exciting. There are a few nice Easter Eggs that refer to the original movie. Just all around, I really enjoyed the movie. Is it as high on the list as it is because I had low expectations? Absolutely. But I think that if I were a fan of the original, I still would have enjoyed it quite a bit.
Created by His Excellency Kaboom32 at 9:08 PM