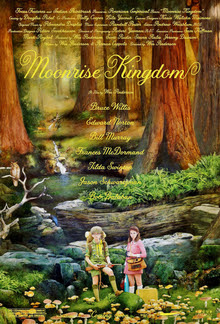 Here's the deal with Wes Anderson movies. They are always a mix of weird and fun. Your enjoyment of the movie depends on how much of the weird becomes fun for you.

I enjoyed Rushmore and the Royal Tenenbaums despite the weirdness.The weirdness was all right, and I enjoyed the characters enough to like both movies.

In The Life Aquatic with Steve Zissou and The Darjeeling Limited, the weird became too quirky to enjoy the entire films. I liked Darjeeling more, and there are some really great parts.

With all of those movies, and Bottle Rocket before those, there are plenty of little bits to like. But there's also a bit of a barrier that you have to get past to enjoy the movies as a whole, one that I never really could.

The characters worked and worked together. But they never became too weird that you couldn't relate to them. You continue to like the characters.

The plot has its moments of weird, but they work. You never feel lost and instead enjoy the ride.

In my Avengers review, I mentioned a few great scenes from this year. Add one more. The opening scene introduces us to the characters in the family by moving in and out of the rooms of the house. It's absolutely beautifully done, and had me hooked for the rest of the movie.

I wonder is making The Fantastic Mr. Fox led to Anderson pulling everything together. Since it was made primarily for kids, he had to reign in the weird enough to make it all fun. I hope he has it all dialed in. If so, we're going to see some really cool things from him in the future.

Created by His Excellency Kaboom32 at 9:20 PM