Number 8 - The Perks of Being a Wallflower 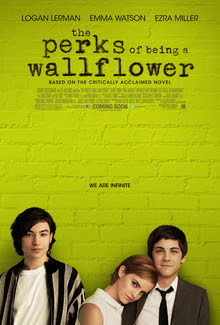 I don't know if I've really disliked a trailer and then enjoyed a film as much since Fight Club.

After viewing the trailer for The Perks of Being a Wallflower many times, I was prepared to hate this movie. In the trailer, I really disliked two parts, both closely related.In the first, Ezra Miller is seemingly sarcastically rooting for his high school football team. In the second, he and Emma Watson are celebrating his C minus grade and declaring him to be "below average."

In addition, I was concerned with the lead actors. Logan Lerman is dull. He lacks charm. The only other movie I had seen with Ezra Miller was We Need to Talk About Kevin. He was creepy as shit in that movie, and his look makes him even creepier. And Emma Watson is, well, Hermione.

When Perks received good reviews, I went for it. Once again, really low expectations probably helped. But the two scenes from the trailer that I hated were out of context.They didn't come across as Hollywood movie high school rebels within the movie. And then the three leads were really, really good. I don't want to say that this is a realistic display of high school. But then again, any movie that shows the reality of high school would be extremely boring and depressing.

I recently read the book. It's a really quick read, which actually makes it the right length for a movie.And the screenplay was written and directed by the book's writer, Stephen Chbosky.That probably helped, as the movie is a very faithful adaptation.

It is a great movie? No. I can list at least ten movies that I saw this year that are better. But that's not what this list is about. I liked it quite a bit.

Created by His Excellency Kaboom32 at 3:43 PM