I promised yesterday a couple days of delicious burgers. I hope you weren't expecting In-N-Out. I enjoy an a burger from there every now and then, but the crazy cult following is hyper inflated. I follow up Fuddruckers with a delicious Nation's burger. 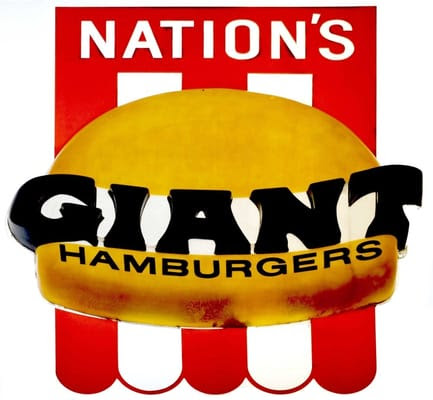 Nation's cooks up their burgers diner style right behind the counter. You know that they are cooked up when you order them. I order mine with the grilled onions and sliced pickles.They give you plenty of both of those toppings, as well as the rest.

The biggest complaint I usually hear about it is that they put too much dressing on them. To which I reply two things. First, I like the Miracle Whip dressing. Second, you can order it without or light on the dressing. They'll do that. And then you too can enjoy a tasty Nation's Giant Hamburger.

Are there more awesome burgers than Fuddruckers and Nation's? Yes. But not by a whole lot. And when they're consistently awesome at these two places that are both nearby and farther away, that makes them both awesome.
Created by His Excellency Kaboom32 at 6:40 PM

A half-continent away from my days around the bay I truly miss the wonders of the Nation's Giant Hamburger.

No local burgers match the awesome entirety that was the Nation's burger. The few joints around this backwoods hillbilly heaven offering anything near the pure unadulterated yumminess of a Nation's burger charge 3 times the price of Nation's.

Relish those Nation's burger ye who still abide within driving distance of an outlet. You can not truly appreciate the wonders of a Nation's burger until it is no longer available.