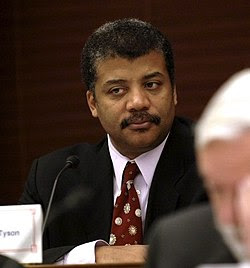 Neil deGrasse Tyson is one of the most awesome people on the planet. And he can probably tell you more about every other planet than anyone else.

Guests on the Daily Show can be hit or miss.Neil is never a miss. He's one of those people who you learn something new from every time you hear them speak. He's not only super brilliant but he can explain his ideas to the layman.

His love of science is infectious. When he speaks, I almost want to study science. I don't, but I read more science after watching or listening to something with Neil on it than I normally would. Just listen to him talk about Sir Isaac Newton.

Created by His Excellency Kaboom32 at 5:54 PM