Bring Back My Peace Prize to Me!

Don't read my blog if you like Barack Obama.

Allow me to begin by stating that I'm not totally shocked, and here's why. I was in Sweden and Norway this past summer. The Noble Prizes are awarded in Sweden and Norway (all but the Peace Prize in Stockholm, the Peace Prize in Oslo). I visited the museums in both places to learn more about it, and visited the Town Hall of each city where the prizes are awarded.

Every once in a while, we would talk with some locals. The people all over Scandinavia are very approachable, and enjoy talking with Americans. They would quickly bring the topic to Barack Obama. They wanted to let us know that they liked him. They felt like their friend America was back because he was in power.

I remember talking to one person right after I took the picture to the right. 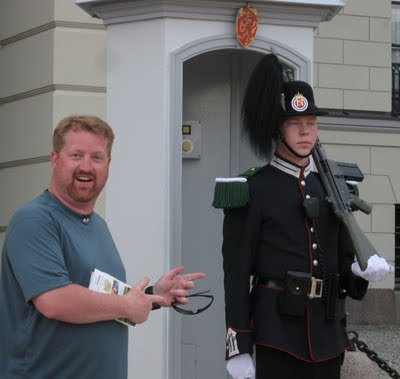 No, I didn't talk to that guy. But it was right after that. I was with one of our tour members from Texas. When the Texan told the Norwegian that he was from Texas, he said that the Texan must like George Bush. The Texan responded with the affirmative. He then added, "Well, I don't know about the decisions he made over the past year or two..." and I of course jumped in with, "Or eight or so..."

But I really got the feeling on this trip that the rest of the world (or at least those SOCIALISTS) felt some of the hope that we saw in Chicago the night of the election. But perhaps, as it was with me, it was less about Obama going is as it was with Bush going out.

So I think it's that feeling that "earned" Obama the Nobel Peace Prize, which is why I'm not surprised.

So now you get to earn a Nobel Prize for talking about peace? Don't you have to DO something about it? Bill Maher is correct. Saturday Night Live is correct. Republican pundits are correct. OBAMA HASN'T DONE ANYTHING.

He talked about closing Guantanamo. Last I heard, that wasn't going to make its deadline. He talked about taking all the troops out of Iraq. I understand it's still going according to plan, but what kind of impact is that making yet? He's escalating troops in Afghanistan. Because history is TOTALLY on his side there.

I've talked about these things, too. WHERE'S MY NOBEL PEACE PRIZE?

OK, some might argue that he did end the missile shield program in the Czech Republic and Poland. But once again, I've traveled, and that traveling gave me some insight. You see, the people in the Czech Republic and Poland LIKED the missile shield. It gave them a sense of being part of the community and a friend to the US, like we have their back should anything happen. Is that a good enough reason to keep it? No. But it also means that removing it isn't such and easy decision. 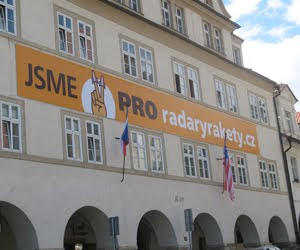 Why would I happen to remember that fact about the Czech Republic? It's because I took this picture. This is a banner in support of the missile defense system that I took in Prague. Our tour guide knew quite a bit about it and explained it well enough so that at the very least I remember it.

So what is it, then, that earned Barack Obama the Nobel Peace Prize? He got it for the same reason that the Scandinavian people like him. He isn't George Bush. But I'm not George Bush either. So I repeat, WHERE'S MY NOBEL PEACE PRIZE?

So I want to end this by talking about someone who earned the Nobel Peace Prize who definitely earned it, but not enough people know about. I didn't know anything about Norman Borlaug until a few years ago. Penn Jillette (yet another mention on my blog) interviewed him on his podcast and had talked about him a few times. I believe they mentioned him on Bullshit! a time or two, as well.

Borlaug won the Peace Prize in 1970 for his work in increasing the world's food supply. I'm no where near an expert in the science of wheat, but I believe that he genetically engineered wheat so that it was easier to grow and could grow in parts of the world that it wasn't able to before. Because of this discovery, and his promotion of world hunger issues, he is credited with saving over a billion lives. Repeat: over a BILLION lives.

He passed away just a month ago at the healthy age of 95. Forget athletes. Here's a true role model.
Created by His Excellency Kaboom32 at 9:25 PM

Good comments, Scott. It's a fair question to ask if the Nobel Committee is voting against Bush instead of for Obama. I'm happy for the guy that he won it, but it's really early in the game. That's like given Tiger Woods the Masters' jacket if he had a good first round!

Well, you asked, so here you go: http://www.MyPeacePrize.com