Face-To-Face with... the Right!

Don't read my blog if you're a Republican.

Much like yesterday's post, I do have to amend that and state that if you strongly identify yourself with Bush's style of Republicanism, you're the type of Republican who won't be too happy with my blog.

There's a large group of people who call themselves Republicans, but they are really fundamental, born-again Christians. These folks are totally against abortion. Since that's the Republican platform, they are Republicans. But over the past 20-30 years, they have taken over the Republican party. I think it's a shame that so many political leaders have allowed this to happen, but that's where the money is.

Allow me to discuss a few examples of Right Wingedness. The first I know isn't strictly a Repub issue, but it certainly slants that way.

Read the opening paragraph to this article about Prop 8 from SF GATE:

A federal judge has ordered sponsors of California's Proposition 8 to release campaign strategy documents that opponents believe could show that backers of the same-sex marriage ban were motivated by prejudice against gays.

This confuses me. Why? Because I didn't know there were any other legitimate reasons to back Prop 8 and be against same sex marriages. After all, they only had two "public" arguments.

Their first was that the definition of marriage has always been between a man and a woman. Those who state that are either ignorant or liars. We know that Ancient Greece and Rome both had same sex marriages (Nero was married to one of his Eunichs). Biblical records (which I wouldn't use in any other argument, but the Christians seem to like that stuff) are full of multiple wives. 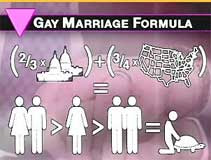 Their second was that they were protecting marriage. This shows that people who supported Prop 8 had shaky, unstable marriages. It also shows the ability to completely ignore the concept of divorce. Something I want to write about in a future blog is whether Conservatives know how to define the word "Optional." As The Daily Show pointed out many years ago, if gay marriage were to be legal, it would not be mandatory. So for me, since I'm not gay, I wouldn't try to marry a dude. And if a dude tried to marry me, I would say no. Repubs know this one: "Just Say No."

So what's left? Their third argument, which isn't the public one, but what everyone was thinking: It's icky.

Our good Republican friends also love to bash Democrats for being "Tax and Spend" Liberals. And here's where the modern Republican Party has fallen apart. If you're going to be the opposition to that, you need to stop spending. Don't start an unjust, unneeded war that you can't afford. But then again so many of their friends made a lot of money. And since trickle down theory works SO WELL, our economy is booming right now . But yeah, Obama spending all this money in ways that the rich won't get richer - that ain't flying, folks. That money (not the money thrown at Iraq and put back in the pockets of the wealthy) is going to bankrupt our grandchildren. Here's the kicker - in general, I agree with lower taxes and smaller government. But I have no common ground with the current stand.

But public amnesia is important to the Repubs. Look at the ridiculous debate over Obama's speech last to kids about education last months. Our need to support our President changed with the color of the Commander-in-Chief's skin. Do well in school is now indoctrination.

On a mild tangent, I got into a mini-Facebook argument with a Right Wing friend from high school about this issue. This was a friend of mine from late high school and early college. While we disagreed politically on everything, we got along well enough. I hadn't talked to him in a few years until he added me as a FB friend a couple months ago. In this case, he wanted to turn it into an issue, and I wouldn't go there, since there was no issue. A couple days later I noticed that I was dropped as one of his friends. Since that was almost the only contact I had with him recently, it has to be why. Was the argument too intense for him? I don't know. I'm not shedding any tears over him leaving - it just seemed lame.

I think I have my biggest reaction to Republicans when they jump on the Christian bandwagon and attempt to tear down science. Global Warming? I honestly don't know enough to given an answer. But I know this much - conservation actually saves money. Also, there's a shitload of money to be made over the next 30 or more years in the green movement. Shouldn't that alone satisfy the Republican platform? Well no, because of two reasons. The first is that their current wealthy friends don't want a new wave of entrepreneurs. They want the cash all to themselves. The second is that Global Warming is SCIENCE BASED. Science starts with an S and so does Satan, so therefore it's evil.

And you say you want some evolution? No no, the Republicans aren't having any part of that. Again, opposition to evolution is a Christian idea. Republicans don't have any real reason to attempt to change school standards to accommodate for Intelligent Design any more than Dems should. It sucks that they have aligned themselves with liars like Kirk Cameron (two blogs about his lying lies HERE and HERE). It sucks that Christians lie to teach this point. And to those Christians who don't lie about it - those Republicans who don't lie about it - sorry. I hope you get a louder voice (or if you have one already, spread that word)to stand up against them to give an alternate viewpoint. And honestly, if you want to read a blog from a Christian with common sense, HERE is a good place to start.

And if you want to learn just one little fact about science, here's the most important fact: Science is Real.

To wrap it up, it's easy to understand the appeal of the Republican Party. It's because on the outside they promote the fundamental ideal of Capitalism. They promote the American Dream. Anyone, if they work hard enough, can grow up to make it. The sky's the limit. You can be as wealthy as you want. That's how they get voters. Everyone wants the possibility to be rich someday. Keep the taxes of the rich low because someday that might be me.

The problem is that the rich folks' club has exclusive membership. And you aren't invited. Honestly, if you're pulling in a healthy six figures or more, vote Republican. As long as you're looking out for yourself and your assload of money, keep voting that way. It's the people who make less than that. People who make less than I do. Voting Republican? Really? Because they hate you. But they love your vote. Keep voting, idiots!
Created by His Excellency Kaboom32 at 3:35 PM

Here's another thing with a lot of "conservatives" - they don't like to hear or read anything that doesn't confirm their world view. That explains why Bob dropped you as a friend. Kirsti's cousin's husband dropped me for the same reason. I thought what he had to write was batshit insane, but I never considered dropping him.